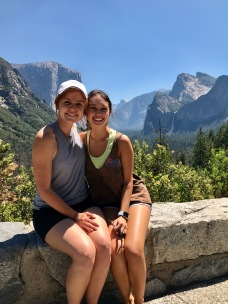 Jess Snow is my hero

I want to be Jess Snow

There’s nothing like a day in Yosemite with good company and a warm smile. On this beautiful Monday, I met Jess Snow in Oakhurst where we set out for a little adventure. We headed up and through the gate (I have a pass so feel free to explore Yosemite with me during summer!) and then through the tunnel. I wish I could put in words the jaw dropping affect that overcomes you when you lay eyes on the view of El Capitan, Half Dome, and Bridalveil Falls. But I can’t so I guess you’ll have to see it for yourself 😉 And when you think the view can’t be better, you remember you’re viewing God’s creation with your friend and then life seems complete.

So just a little fun fact about El Capitan that I was trying to remember and tell Jess today but was lacking all the information, involves bears and a worm. This was a little tale told by the Yo-Ho-Me-Tik Indians.

“One day Grizzly Bear and her two baby cubs were taking a walk by the Merced River. They had been digging up roots, searching for bugs and worms. So, they were very tired. They approached a large flat rock along the Merced River and laid down to rest for awhile. The following morning, Grizzly Bear and her two baby cubs awoke. They looked around curiously. Overnight, that flat rock had grown into a large mountain and was high enough to touch the moon. Because of this, they could not find their way to Ahwahanee. So they waited.

The old bird and animal people of Ahwahanee were stunned to see that the mother bear and her cubs were on top of the rock. They wanted to help the mother bear and her cubs, but no one could reach them. They all tried to climb it, but could not reach the top. Mouse tried first, but he could not climb even half of the way. Rat was next. He climbed a little higher. Then Mountain Lion, Fox, Crow and many others tried. But not one could climb to the top of the rock. All of the animal people were discouraged! How could they help the bears down from the rock?

At last, after all the rest had failed, here came Too-Tock, the green measuring worm. “I can climb the rock to save the bears!,” Worm said. They all laughed at the little worm, but the little worm tried anyway to prove himself right. As he climbed he sang a little song. He had been climbing for days until at last he had reached the top of the rock. But it was too late. He had not been able to save the bears, because they had starved to death.

Too-Tock brought a rib bone down from the top to prove he had made it. They were all stunned to see him with the rib bone. They danced around and held a memorial. Since then, the great rock has been called Too-Tock-Awn-oo-Lah in honor of the little worm.” 1

Want another one? Okay! Here is the myth of Bridalveil Falls.

“The vast ravine of Yo Semitee, formed by tearing apart the solid Sierras, is graced by many waterfalls raining down the mile-high cliffs.” The Indians used to tell this legend about the one called Bridal Veil Fall.

Hundreds of years ago, in the shelter of this valley, lived Tu- tok-a-nu-la and his tribe. He was a wise chief, trusted and loved by his people, always setting a good example by saving crops and game for winter.

While he was hunting one day, he saw the lovely guardian spirit of the valley for the first time. His people called her Ti-sa-yak. He thought her beautiful beyond his imagination. Her skin was white, her hair was golden, and her eyes were like heaven. Her voice, as sweet as the song of a thrush, led him to her. But when he stretched his arms toward her, she rose, lighter than a bird, and soon vanished in the sky.

From that moment, the Chief knew no peace, and he no longer cared for the well-being of his people.

Without his directions, Yo Semite became a desert. When Ti-sa-yac came again, after a long time, she wept because bushes were growing where corn had grown before, and bears rooted where the huts had been. On a mighty dome of rock, she knelt and prayed to the Great Spirit Above, asking him to restore its virtue to the land.

He granted her plea. Stooping from the sky, the Great Spirit Above spread new life of green on all the valley floor. And smiting the mountains, he broke a channel for the pent-up snow that soon melted. The water ran and leaped far down, pooling in a lake below and flowing off to gladden other land.

The birds returned with their songs, the flowering plants returned with their blossoms, and the corn soon swayed in the breeze. When the Yo Semitee people came back to their valley,they gave the name of Ti-sa-yac to what is now called South Dome. That is where she had knelt.

Then the Chief came home again. When he heard what the beautiful spirit maiden had done, his love for her became stronger than ever. Climbing to the crest of a rock that rises three thousand feet above the valley, he carved his likeness there with his hunting knife. He wanted his tribe to remember him after he departed from the earth.

Tired from his work, he sat at the foot of Bridal Veil Fall. Suddenly he saw a rainbow arching over the figure of Ti-sa-yac, who was shining from the water. She smiled at him and beckoned to him. With a cry of joy, he sprang into the waterfall and disappeared with his beloved.

The rainbow quivered on the falling water, and the sun went down.”2