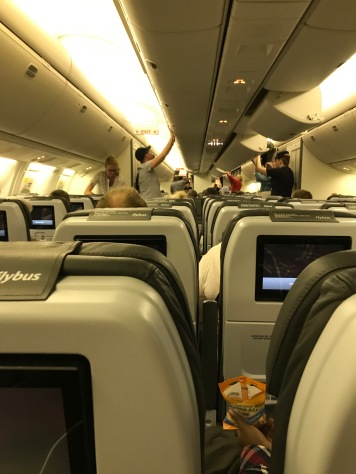 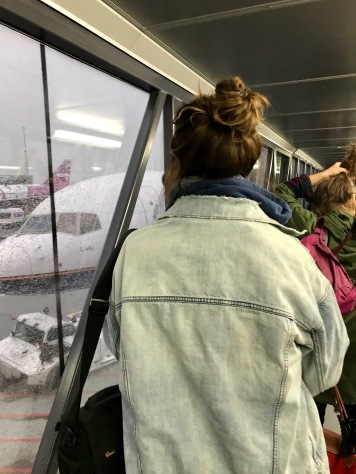 Oh boy, we had no idea what we were getting ourselves into. I have never flown overseas, so I was clueless as to what it’s like to travel for more than ten hours, but I was soon about to find out. So here is the layout of the journey to Germany: 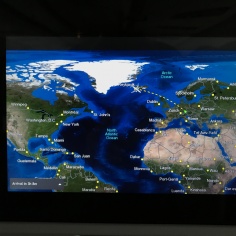 During the first flight, I tried to get some sleep since this was my only change. But of course, I just couldn’t fall asleep. I shut my eyes, which felt magical, but sleep was not an option. I listened to a couple of podcasts, and when I got sick of listening to people talk, I switched to music. I journaled a little to kill some time where I wrote something that inspired my “Dear Future Me” post under the Travel –> Study Abroad section of my blog. Before I knew it, I heard the pilot come on the speaker and say, “We are starting our decent. Make sure you’re buckled, your seat is in an upright position, and all laptops are put away.” Sweet, sweet sound to my ears.

Afraid we were going to miss our flight from Iceland to Germany due to delays, we ran off the plane and straight for our gate. What we would soon learn is that we still had to go through the long line of customs. We waited impatiently in line, thinking we were going to miss our flight. Front of the line, stamp in the passport, and a full sprint to our gate, but we made it just in time. Embarrassed because we felt as if we were the last ones to get on the flight, we got comfortable and attempted to sleep, again. But nothing. This flight seemed even longer than the first! I tried to do anything to keep me busy and from dying of boredom. I read part of a book, listened to a podcast, then switched to music, played with my president flash cards, looked at old photos, and watched a television show curtsy of the airline, until finally, we touched down in Germany.

This is a side note, but I found it so strange. We headed to baggage pickup where there were bags everywhere. No I am not exaggerating. Piles of bags in corners and all spread out as if the airport machines broke and spit bags everywhere, but nobody else seemed to notice. This was random, but maybe you can explain this to me if you know why this happened or if this is normal.

Bags grabbed, hugs exchanged between us and Imogen, and then we were off again. Now for the 30 minute tram ride to the bus station. I tried very hard to stay awake, but found myself staring out the window in mix between a daze and a nap. Thirty minutes passed and we jumped from the tram to the bus. “You’re almost there,” I kept telling myself while I dragged my bags behind me everywhere I went. Fifteen minutes up. Now for the short walk to Imogens, which felt like hours because my bags weighed so much and my body was weak from the lack of sleep. Once we made it to the front door, all I could see was stairs. Almost. There. We heaved the luggage up the suitcase, dropped it on the ground of the flat, and collapsed. Germany, be ready because this is just the start.