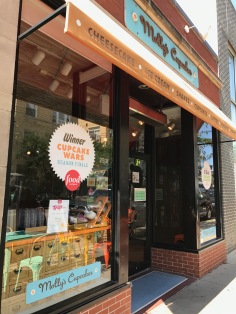 Lots of walking and traveling calls for vegan cupcakes, toast with hummus, a soy mocha, and a Mexican bowl. Molly’s cupcakes was actually on Cupcake War’s where they won the season finale! I got a chocolate vegan cupcake that I later ate in Lincoln Park while watching dogs pass by. For lunch I had toast with hummus paired with an iced soy latte from Colectivo Coffee which was filling and appetizing! Lastly, I had a tortas bowl from Rick Bay’s restaurant in the airport while waiting for my flight to Iceland (I can’t find exactly what I got on the menu but it had rice, beans, spinach, radish, avocado, tomatoes, and some sort of sauce). To be honest, I am getting so hungry writing this! All meals / snacks were vegan!

Life update: I’m obsessed with golfing
a smiley hate for a smiley girl☺️
@nomorelonelyfriends - turning strangers into friends💕
my friends are doing incredible things!!! so proud of you @marissameizz for starting @nomorelonelyfriends & creating such a beautiful community🤍 I’ve missed you so much! let’s not wait years to see each other again plsss